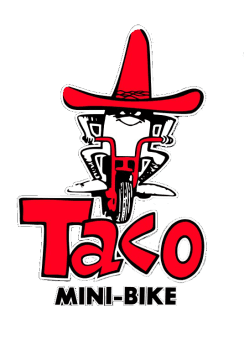 Joe customized a Taco 22 exactly as I had in my head just in time to surprise my wife for Christmas! She was blown away by the color and the power it had. Great throttle response and super smooth whether you want to cruise or rip it down the street. The sound is great too! Thank you to Joe and his team for pulling strings getting this to us the weekend before Christmas! You really did pull off a Christmas Miracle.

All out of Ideas on gifts from Santa (Because a Dirt Bike was out of the question) We happened upon Taco Mini Bikes and were not let down. We were late on ordering but it did not prevent them from delivering the bike on time and left our son with the Merriest Christmas ever! The smile on his face was worth it not to mention the amazing service from Joe and his Team. I have not done business with anyone like him and their company. We can’t thank TACO MINI BIKE enough.

I’d like to Thank JOE RIVELLO Taco Mini Bikes and his crew for a Show Stopping 100B! True Craftmens. They do what they do.

I love my Taco 22. It brings me back to when I was a Kid!
Thank you

I purchased my 100B from Taco and can’t remember when I have had so much fun. The quality is 2nd to none, even better it is made in America.

I had Joe and his team build me a Custom 100B. It exceeded my expectations. From the Powder Coat to the Frame I could go on and on. I could not purchase anything like this for what this cost me and for what I got.

Thank you Joe and everyone at Taco. Amazing build, turns heads and get compliments Everywhere I Go. Every detail perfect. Runs like a chamo. Thank you for the fabulous custom-build 100b.

Very Professional, Knowledgeable and Experienced. Joe at Taco Mini Bike will make sure to get you exactly what you want. I have worked with so many different custom shops, but Taco Mini Bikes is totally a whole different level. “THEY ARE THE BEST” Period!

I purchased a Custom 100B from Taco Mini Bikes. The bike turned out awesome. Anytime i needed an update or wanted to add something it was no problem. I give Joe and Taco Mini Bikes 5 stars. They were honest and Great to do business with. Thank you Joe and the Taco Mini Bike Team for a Great Custom 100B.

I had a TACO MINI BIKE when i was 12 years old. They were Great then and now that I'm older I still can't shake off the Kid in me that prompted me to order my Dream Taco! The folks at Taco are the Greatest. They will build you a Quality Mini Bike of your dreams too. They've come along since I was 12. I highly recommend that you get yours today. Thank you Joe and Dave. I appericate your Professionalism and quality Craftmanship you put into each of your bikes. Buy a TACO today!

I bought my son TACO 22 MINI BIKE for Christmas. I can Honestly say I can't get him off it. He Loves it and so do I. What father doesn't want to hear the words "Daddy this is the Best Christmas ever"

Back in the late 60's all my friends had mini bikes. Me being a red blooded American kid myself, I wanted one too. The problem was that I was financially under the influence of my dad who wasn't a bad dad, but was the cheapest dad ever in the history of the known civilized world. So, guess who was the poor slob that didn't have a mini bike, or any other kind of bike (for that matter) growing up. You got it; me.

When I got out of the Marine Corps, college and was finally on my own, the first thing I got was a sport bike. Later, I also went with dirt bikes, but never a mini bike. Unfortunately, they had quit making them back in the early 70's. I always felt that I had missed something special by not having one. This all changed when I happened upon the Taco mini bike website...I was in love. Not that silly lovey-dovey stuff a guy has with his wife, but the hard core kind of love that can only be had between a guy and his mini bike.

Joe was terrific. He worked with me and my schedule to get me my little purple beauty, and I have been very happy with my purchase. I got the base model, because I wanted my mini to be as close to what I missed out on as a kid. It's cool, it's quick, well built, runs great, and starts up on the second pull. Thank you Joe, it's a terrific mini bike!

Joe, Now that I have had a chance to ride the Trail 100 for a month now, I wanted to let you know the mini bike's fit and finish is amazing. It is a work of art and a lot of fun to ride. I was also impressed with the excellent shipping container and delivery. The shipping company provided frequent updates regarding the shipping status and delivered promptly within their window.

Perhaps most importantly, the customer experience was fantastic-from when I first emailed Taco Mini-bikes to inquire about the mini bikes to when it was delivered to my doorstep. What I found truly remarkable was the personal touch. Whenever I emailed Taco with a question, my phone would ring within minutes.

Thank you for the excellent mini bike!